How Is Paintless Dent Repair Done

If you’ve recently noticed a small dent in your car or maybe you got a random door ding while you were in a parking lot and now you are wanting to know how to get that dent fixed.

Well, today I’m going to share with you just one of the many ways that paintless dent repair is done.

(You can watch this video to see how a door dent was repaired https://www.youtube.com/watch?v=wZakoZ8a2NU )

How Paintless Dent Repair is Performed

There are several different names used to identify paintless dent repair. A few of the terms are paintless dent removal or the short acronym of PDR. Many times others just want to know how to pop out a dent.

Just like there are many names for paintless dent repair, there are many ways that we use to remove vehicle dents. Just a few ways the paintless dent repair technique is performed is by either pushing out the dent, using glue pulling to pull the dent out, and using hammers and knockdowns to manipulate the metal. Often all these methods are used in combination when we are fixing dents.

Today I’m going to share with you just one of the dent repair methods used for paintless dent removal.

See More Info About The Cost of Paintless Dent Removal 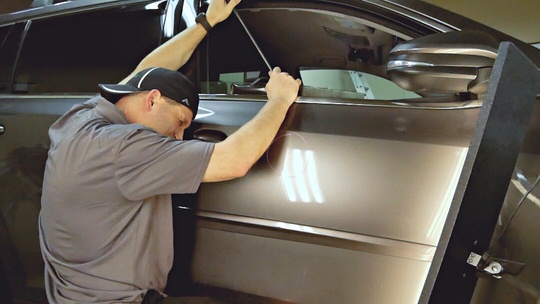 How To Push Out Dents Using PDR Tools

The most common method of paintless dent repair is using specialized tools for PDR to push out the damage from behind the vehicle panel.

We first need to get access behind the panel on the car. There are a few ways this is done depending on the panel. For minor dings and small dents in the door of the motor vehicle, we can often get access through the window opening or by removing trim pieces or the inner door panel. If we have good access to the dent from the opening in the window, we will use a special wedge to allow a little extra room for the dent removal tool and we will place either a plastic or metal guard over the window to protect from damaging the glass.

Now that we have access to the back of the body panel we use our dent removal tool to gently apply slow pressure and small precise pushes in the center of the dent. The reason this repair process is done this way and not by just a quick push or pop out of the dent is because the gentle pushing preserves the original paint. This dent repair process avoids causing more damage, and brings the damage up clean so that when finished the outside of the car is restored to its original shape.

Why a Paintless Dent Removal Light Is Used

The reason we are able to make those precise small pushes behind the dent and to know exactly where the PDR tool is behind the panel is because we use special PDR lights.

PDR techs use many different styles of lights. Some use a fog pattern and others will use lines or stripes on the light. These fog or lines help the dent tech be able to see exactly where the tip of their tool is located. Using these dent lights they can also see even where the smallest low and high spots are of the dent, even down into the orange peel surface of the painted finish.

So now you can see why these dent repair lights are needed and how a trained dent pro uses them to achieve a flawless repair of the dent. 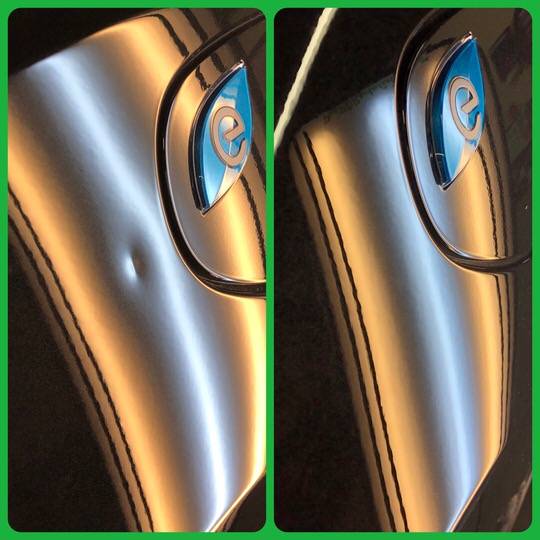 How To Get a Perfect Dent Repair Finish

When you use a professional paintless dent removal auto body shop you can know that you’ll be able to get a perfectly flawless finish for the dent in your car.

The dent repair experts here at Excel Dent Removal have the special tools and over two decades of experience to remove many different types of minor dents, car door dings, and hail damage to your vehicle’s surface using the paintless dent repair method.

You can contact us today by phone or email to schedule an appointment for a damage inspection or to have your dent repaired. We are here to help answer your questions about how paintless dent repair works.